Tanzania is in eastern Africa, just below Uganda and Kenya, and on the Indian Ocean. At the end of our eleven day/ten-night Zambia safari, we flew from Livingston to Johannesburg for an overnight stay. The next day we flew to Arusha, Tanzania via Nairobi. Arriving at Arusha Coffee Lodge at around 8 pm, we spent two nights and one full day relaxing there before our next adventure. On the morning of 28 August 2014, our driverguide, Nelson, picked us up at ACL in his 4x4 Toyota Land Cruiser for the trip to Ngorongoro Crater. After three nights and two full days in the Crater while staying at Lemala Ngorongoro Camp, we flew by Coastal bush plane out of Manyara airstrip to Kogatende airstrip for four nights at Sayari Mara Camp in the remote NW corner of the Serengeti near the Mara River and the Kenyan border. All arrangements for our requested Tanzanian safari beginning with our arrival at ACL until our return to Arusha and departure from ACL on 5 September 2014 were made by Africa Travel Resource.

All photos are Copyright 2014 Larry Lenon All Rights Reserved and show a faint watermark. THE WATERMARK WILL NOT APPEAR ON PRINTS, MERCHANDISE OR DOWNLOADS ORDERED THRU SMUGMUG. Questions ? Critique ? Add a comment (lower left) or e-mail me!
Read More 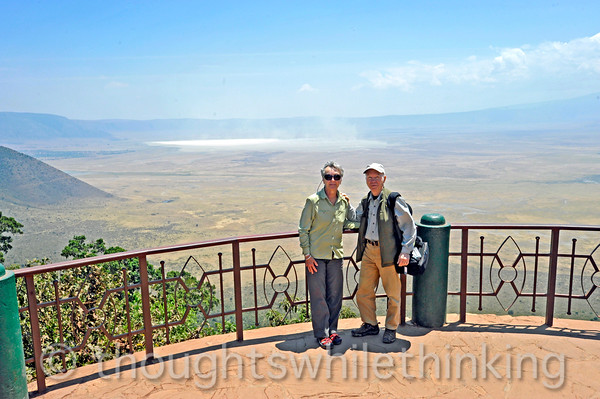 At "Crater View", one of the most spectacular vistas in the whole world. With a diameter of about twelve and a half miles, the crater is the world's largest unflooded caldera, created two million years ago when an enormous volcano exploded and then collapsed. Containing a soda lake (that white spot in the distance), forests, streams, most of the mammals of East Africa except for giraffe, which can not traverse the steep crater walls, this is one of the best game-viewing locations anywhere. Of course, being world-famous, lots of other travelers are also to be found in the crater, as you will see later. So we selected a camp that is inside the NE gate and part way down the descent road. This affords, with an early morning departure, an hour or so head start on the others who are staying at lodges and camps further up on the rim.